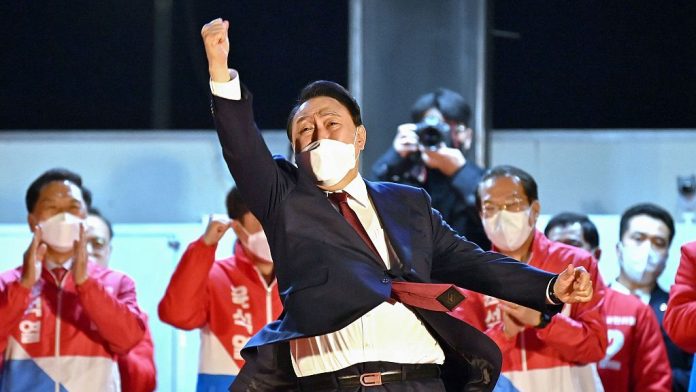 Yoon Suk-yeol, a conservative candidate in South Korea, has clinched the presidency with a narrow margin over his closest competitor, Lee Jae-myung. Suk-yeol, a former prosecutor who has in the past imprisoned South Korean leaders on corruption charges, campaigned on the platform of deregulating crypto.

Crypto took centre-stage as a campaign issue, with the leading candidates defining crypto-friendly stances to win over the young voters. The debate came on the back of harsh regulations on the crypto markets.

Korea’s financial watchdog, the Financial Services Commission (FSC), has imposed tight regulatory requirements such as asking banks to monitor accounts of crypto exchanges in the country. Also, last year, the country saw about 70 exchanges close down due to a regulatory crackdown.

With South Korea having one of the highest rates of crypto adoption in the world today, the need to establish pro-crypto laws and regulations emerged as key. The country’s soaring real estate prices and the difficulty of finding jobs have pushed the youth to invest in crypto and blockchain-related spaces.

Further, the importance of crypto investors has been evident with the national assembly in the past pushing back a virtual assets taxation plan for a year, following severe protests about the policy.

During his campaign trail, the new president vowed to deregulate the crypto industry to promote its growth further. He pledged to raise the crypto gains tax threshold to 50 million won from the current 2.5 million won.

As part of his plan, Yoon indicated a willingness to establish measures to entice unicorns in the crypto sector and facilitate their growth. Some of the big gaming companies in the country have already registered an interest in creating non-fungible tokens (NFTs) and games that would earn players tokens.

Yoon allayed fears that the adoption of crypto would weaken South Korea’s currency and challenged the country to benchmark with the US stance on crypto. He holds that crypto and digital assets have a huge potential to create jobs, promising that if elected, he would embrace the digital economy in line with the changing market trends.

He further promised to put up structures to protect investors and confiscate crypto profits gained illegally.

Lee, the runner-up, had plans to redistribute unearned profits to citizens through cryptocurrencies. However, the plan was deemed unrealistic and that it was only campaign-motivated.

Ahn Cheol-soo, a former IT developer, did not promise much on policy changes but called for transparency in the cryptocurrency market. Interestingly, he also wanted to leverage blockchain tech to achieve transparency, with an ambition to build his party, The People’s Party, based on this technology but was unsuccessful.